back to search results

Toni Herger, Wildheuer auf Urnerboden. Bergbauer Toni Herger packt einen grossen Ballen Heu um ihn talwärts zu fahren. Wild haymaking is a form of making hay which is commonly used in the alpine region, especially in Central Switzerland, in high located areas with steep hillsides and which cannot or only hardly be reached with animals. This practice of grass harvesting is not riskless.
The meadows where wild haymaking is practised are usually collectively owned, and the corresponding regulations are set by a co-operation. For example, wild haymaking is only allowed from a fixed pointof time in the year onwards. After the grass has been cut, it is spread out in order to let it dry. To transport the hay the farmers often use a so-called "hay rope" by means of which a 50 to 60 kilograms heavy bundle of hay coasts down the hill. Wild haymaking is an important measure to help avalanche protection. On hillsides where the grass is not cut, the grass stalks are pressed down to the ground by rain and the first falling snow in autumn, so that a slick surface emerges similar to a thatched roof. © Romano P. Riedo 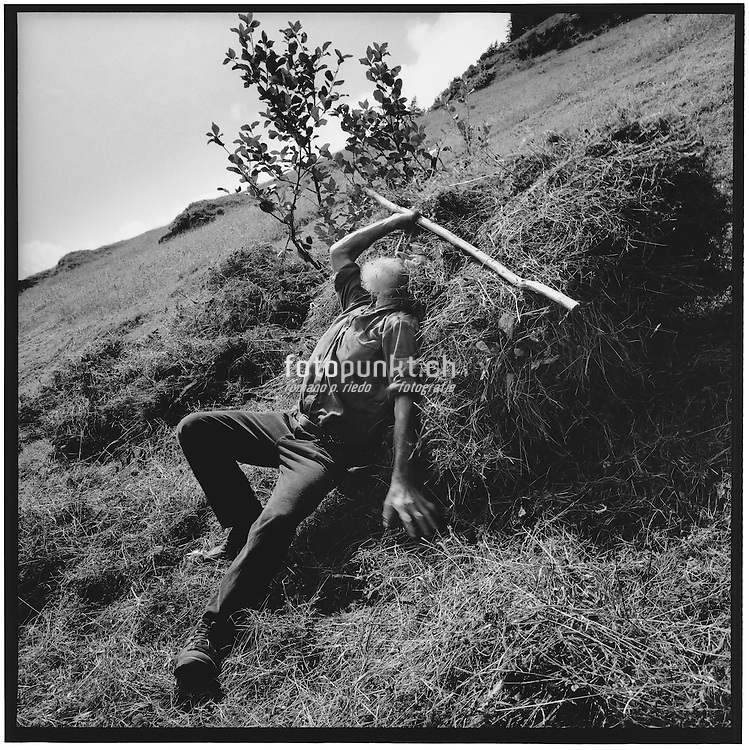